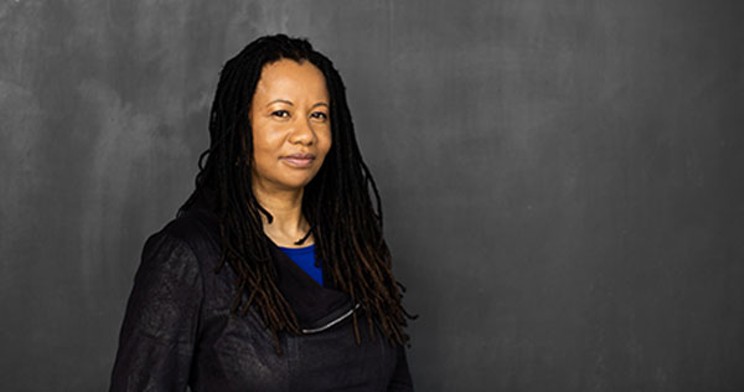 Charmaine Nelson has founded the only research centre dedicated to the study of Canadian slavery, right here in Halifax. MEGHAN TANSEY WHITTON

Charmaine Nelson leads the Institute for the Study of Canadian Slavery at NSCAD.

This September, the research institute Charmaine Nelson wishes she could’ve attended will finally open its doors. The Institute for the Study of Canadian Slavery—a new division of NSCAD University—will dig deep into Canada’s overlooked, 200-year legacy of slavery. It’ll be the sort of spot that reminds you history is more complex than what you learned in grade school, as its fellows and artists-in-residence’s work will help fill the gaps left in those dusty textbooks, re-framing our understanding of Canada’s role in the transatlantic slave trade. The small Institute, which will be located on NSCAD’s Fountain Campus, in a building on Duke Street, will hold its shoulder against the biting winds of the Atlantic and the ravaging coldness of society’s racist apathy.

Since education is the tool that unlocks every door in our minds—since experts say learning and unlearning is the only tool we can trust to make a less oppressive world—then it’s easy to see why doctor Nelson’s dream institute is so important. It will be square one of the mental revolution.

How fitting, then, that Nelson’s the one who founded it. “We have a 200-year history of slavery in this country and it’s not being taught at any level of curriculum: Not in grade school, not in high school, not in college and not in university,” she says, speaking by phone from downtown Halifax. “And there’s very few publications or, let’s say, types of media, or art, or popular culture, too, about slavery that’s produced about Canada.”

RELATED Halifax is not Canada’s Black Mecca: In Toronto, the racism we endured was more sophisticated and subliminal. In Nova Scotia, it’s brazen.

Those numbers will start increasing next September, when the halls of the Institute are full of shuffling papers and clacking keyboards and scratching pencils (COVID-19 willing)—when its inaugural group of research fellows get to work on their projects, which could range from a play to a pottery collection to a formal thesis, thanks to the flexibility of medium being at an arts school allows. This groundbreaking research will happen 800 meters from Halifax Harbour—a place where slavers’ ships once docked—as the Institute becomes the only research centre dedicated to the study of Canadian Slavery.

The school’s arrival is decades overdue, as Nelson points out. “America has an infrastructure, or what they call African American Studies department,” she says, explaining that lots of schools in the US offer an American version of what she’s doing at NSCAD. Even the American body of research on slavery is more robust, with Nelson pointing out American books and sources as far back as the 1970s. “Like, we are so far behind it’s ridiculous,” she says.

“We have a 200-year history of slavery in this country and it’s not being taught at any level of curriculum: Not in grade school, not in high school, not in college and not in university.”tweet this

While we often think of Nova Scotia as an end-of-the-line stop on the Underground Railroad—a place still called “the Promised Land” in the Canadian Encyclopedia, and perhaps even in those old textbooks you half-remember from grade school—it was also a place where some white households kept enslaved people, as shown in fugitive slave classified advertisements from old Halifax newspapers.

It was also a place where slave ships docked en route to their home docks in Europe. “The same ships that were transporting slave-produced plantation crops from the Anglophone Caribbean (islands like Jamaica for instance) also often transported enslaved people from those same islands (in smaller numbers than the ships that departed from Africa) who were then sold in Halifax,” Nelson tells me via email days after our phone interview. In fact, a May 1752 issue of the Halifax Gazette has records of a slaver named Joshua Mauger trading enslaved Africans from the West Indies to Halifax.

But that’s not all. The last ship to transport Africans to slavery was helmed by a Nova Scotian, defying the 1808 laws against trafficking Africans by taking 125 captives from their homeland of modern-day Benin to Alabama.

RELATED The last ship to transport Africans to slavery was helmed by a Nova Scotian: How captain William Foster defied the law and trafficked African peoples to American shores.

If you’re thinking: “But what about the Black Loyalists, and the fact that Nova Scotia is home to one of the oldest indigenous communities of Black people in North America?” Well, you’re not wrong—but you’re still missing a piece of the picture. Many free Black people still lived in destitute poverty and some had no choice but to enter into indentured servitude (a sort of contract-style slavery, with a promised lump sum payment and end date). So difficult were their circumstances in the province that, in December 1791, thousands of Black Loyalists descended on Halifax to board the fleet of boats Thomas Peters was sailing to Sierra Leone—where they hoped to finally be free of white oppression and would form the city of Freetown.

When talking about all this with Nelson, she is quick to show how the fingerprints of the slave trade are all over our harbor city, in examples large and small. For instance, she says, it’s where what she calls our “rum culture” comes from. Nova Scotian liquor stores are stocked with more rum than, say, a Saskatchewan liquor store because of the cultural holdover from those 1800s merchant ships, which brought scads of the stuff to our port—along with other plantation crops and enslaved peoples. “People just look at it like, ‘Oh, this is just how we are.’ Like, really? Why do you think that is?” Nelson adds.

But how does a hidden history get caught in a spotlight—and put under a microscope? For Nelson, it all started in her own student days, studying for her Master degree in art history. “My thesis was on the representation of Black females, such as in mid-20th-century paintings,” Nelson remembers. By studying paintings from “the early period of slavery,” Nelson saw Black women and white women being depicted differently in portraits, even ones by the same artist. It was a feeling of “something’s up here—something on top of racism and sexism. I can’t fully grasp that unless I understand the period of slavery, because I knew that it was coming from that,” she explains.

RELATED You’ve never UNSEEN one like this before: The Centre For Art Tapes’s app-based art show the UNSEEN highlights overlooked parts of life in Halifax.

Soon, she was mentally cutting and pasting scraps of information together to build a private record of the people history forgot—or never noticed in the first place. “Like many other Canadians, I have never taken a class on either transatlantic slavery or Canadian slavery. I had to teach myself everything that I know, and everything that I continue to learn,” Nelson says. Alongside building a new discipline from scratch, she continued studying, getting her PhD in art history and teaching at McGill.

Of course, the record-building never stopped, as her website Black Canadian Studies can attest. It is full of research papers and records, like those fugitive slave classified advertisements and bills of sale. When Nelson describes her work today, it sounds like someone piling crumbs together on a plate, rebuilding a decimated cake fragment by fragment. “I’m almost always dealing with text documents, printed advertisements, from the perspective of a slave-owning classes,” Nelson says, explaining she sifts through enslaver’s wills and old classified ads for clues about the lives of slaves.

“Sometimes you actually find the same name of the person in the same household in a different type of document,” Nelson adds, before diving into a recent example of someone she’s researching: “I came across a slave girl. Her name is so unusual, her name was Thursday, like the day of the week. And she was owned by a white male slave owner named John Rock, in Halifax. So there’s an ad for her escape that he published on September 1, 1772 and he said she’s running away by herself from this household, and he describes what she’s wearing. He threatened—as many slave-owners did—he threatened people ‘You better not help her or I will sue you to the fullest extent of the law’. And he says ‘Whoever may be so kind to take her up and send her home to her said master shall be paid all the costs and charges together with $2 award for their trouble.’”

Thursday runs away again later, Nelson knows, because Rock took out a second ad, offering reward for her return. “It seems to document corporal punishment,” Nelson adds, saying the second ad mentions a lump above Thursday’s right eye. “That’s how much power he has in society: That he can document that he harmed her.”

Thanks to Nelson’s dedication, tenacity and laser-sharp academic sensibility, though, now no other scholar of the transatlantic slave trade will have to forage for their chosen discipline. In 2020, Nelson was awarded a Tier 1 Canada Research Chair “for outstanding researchers acknowledged by their peers as world leaders in their fields,” per the Government of Canada Website. It’s NSCAD’s first-ever such chair, highlighting the school on a national scale—and the seven-year fund will allow Nelson to open and operate her institute.

“My chair is Transatlantic Black Diasporic Art and Community Engagement,” Nelson says. What, exactly, will this look like in practice? “I want to institute a space where the general public feels welcome and is coming, not just for the academic workshop, but for movie nights, right? Or discussions. Or poetry readings. And I want to have, also, a reference library where people could come in, sit down, have a coffee and pick a book off the shelf that’s about the transatlantic slave trade and…just read for a while,” she says.

And if you need convincing that this is an education Halifax needs, Nelson is ready to tell you why slavery’s shadow falls over every aspect of life in North America today. “I think the most urgent issue is police brutality and the over-policing of Black populations,” Nelson says. “Listen, this has been going on for a long, long time, since the period of slavery: this idea of the expendability of Black life—it goes right back to slavery.”

annews AdministratorKeymaster
Accompong News is geared at informing the public on Accompong current affairs, Maroon affairs and News from Jamaica & around the Globe. Stay tuned.
web
http://www.accompongnews.com/
follow me
×

Magdalene Reid, more popularly known as Tom Tom is a real Maroon Queen who celebrated her 103rd birthday on Tuesday, July 19, 2022. She was born in the beautiful Maroon Community of Accompong in St. E
Read More

Parents there are not ready to send their children back to school, despite the fact that poor internet access has made at-home schooling on the Navajo Nation difficult Kate GroetzingerKUER-FM / Associ
Read More

No death certificate for Bunny Wailer

A death certificate for Neville Livingston one of the founding members of the Wailers band which included Bob Marley and Peter Tosh is yet to be issued? Jah B died March 2, 2021 at the Medical Associa
Read More

Please confirm you want to block this member.

You will no longer be able to:

Please note: This action will also remove this member from your connections and send a report to the site admin. Please allow a few minutes for this process to complete.